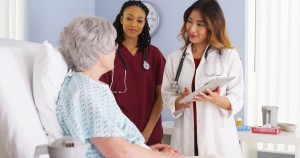 The U. S. Senate unanimously approved a bill last week (July 27, 2015)  that would require hospitals across the country to tell Medicare patients when they receive observation care but aren’t actually admitted to the facility – a difference that most patients miss until they receive their medical bills.

“Observation status” means that even though you are in a hospital bed, you are not classified as a hospital inpatient.  You may be receiving the same nursing and medical care, tests and medications as other patients, but for purposes of Medicare payment, you are considered to be an outpatient.

Your hospital status affects how much you pay for hospital services (like drugs, lab tests and x-rays).  It may also affect whether Medicare will cover care you receive in a skilled nursing facility (SNF.)  You can spend a week or more in a hospital room and still not be considered to be a hospital “inpatient.”  As a result of your treatment, and any subsequent stay in a nursing home, may cost you a lot more.

The Notice of Observation Treatment and Implication for Care Eligibility (NOTICE) Act, or H.R. 876, requires hospitals to provide Medicare beneficiaries with written notification and a related verbal explanation at discharge within 36 hours, whichever is sooner, if they receive more than 24 hours of outpatient observation services.

The notification must explain in easy-to-understand language why the patient was admitted to observation and the potential financial implications.  Seniors admitted for observation must often pick up the costs if they need additional care at a skilled nursing facility because Medicare will only cover these expenses if their inpatient stay lasts at least three consecutive days, and observation days don’t count.

Since the Senate passed the same version of the bill as previously passed by the House, the legislation will now go directly to the President for signature.  The law will become effective one year after it is signed by President Obama.  During that time, regulations will be developed to implement the law.

This new law will give patients a warning before they spend thousands of dollars on care that will not be covered by Medicare.  Some beneficiaries will likely decide to receive a different set of medical services after being notified of their observation status.